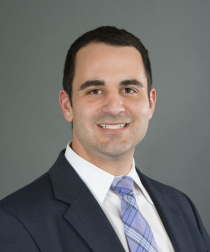 Ephriam grew up outside of a small rural town in south central Virginia on the shores of Kerr Lake. His mother’s side of the family is from North Carolina, and he has spent many holidays in the cities of Durham, Raleigh, and Rocky Mount. From a young age, Ephriam spent his summers working in the tobacco fields and his winters tending to the cattle herd on his family’s farm. He continued to work on his family’s farm during his summer and winter breaks throughout middle school, high school, and his tenure at the University of Virginia located in Charlottesville, VA. During his college years, Ephriam arrived at the conclusion that he was most suited to practice law from the experience and knowledge he gained in his chosen fields of study.

Ephriam continued his graduate education at the Norman Adrian Wiggins School of Law at Campbell University, in Raleigh, North Carolina. While buried among law books and squirreled away for countless hours in the law library, Ephriam managed to meet his future wife who was also a student at Campbell University. During law school, Ephriam was active in various organizations within the law school, including serving as the Comments Editor on the Campbell Law Review, serving as an Associate Justice on the school’s Honor Court, and competing in the National Appellate Advocacy Competition held in New York City. In the summer between his second and third years in law school, Ephriam came to work with the Mast Law Firm as a young law clerk and had the opportunity to participate in his first civil jury trial at a very early stage in his legal career.

Currently, Ephriam practices within several areas of law. He has successfully defended DWI/DUI and other criminal cases, and he has litigated various civil suits, ranging from small claims cases over damage to property to complicated, contract litigation. Ephriam is also experienced in the area of family law, including drafting separation agreements, filing divorce actions, and pursuing claims for custody and child support. He has handled appeals before North Carolina’s Court of Appeals and Supreme Court. Over the years, Ephriam has expanded his practice to include federal litigation and claims originating from the Commonwealth of Virginia. He has handled countless trials and hearings, in both civil and criminal courts. Due to his extensive day-to-day activities in the courthouse, Ephriam works out of our Smithfield location.

Ephriam is active in the local Johnston County Bar Association which provides various services for the community. He has routinely participated in the annual “Ask-A-Lawyer” program which is hosted every year at the Johnston County Courthouse in Smithfield. Ephriam also has a history of donating his trial experience on a pro bono basis to Legal Aid of North Carolina in domestic violence cases.

Ephriam lives in the Flowers Plantation area of Clayton, NC with his lovely wife, Sarah, and his adorable daughter, Palmer. In his free time, Ephriam can be found scuba diving in the Atlantic, training for his next half marathon, wakeboarding on Kerr Lake, or embarrassing himself on the golf course.