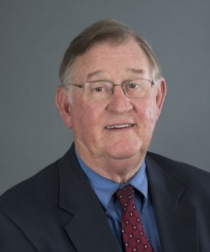 George grew up on a farm in western Watauga County on Mast Gap Road, which runs between Sugar Grove and Valle Crucis, on property which has been in the Mast Family since 1778. His parents, Dave and Grace Mast, who were educators in their early careers having graduated from the University of North Carolina and Meredith College, raised George and his three brothers, Pat, Mack and Bill on the farm. They basically lived off what they produced on the farm. Raising tobacco, beans, corn, white-faced cattle, chickens and hogs, they were able to subsist on what they produced.

There were many chores necessary to maintain the farm—milking the cows both morning and night, feeding the horses, cows and hogs. Summers were busy times pulling mullen, cutting thistles, and putting up hay and corn for the cows and horses in the winter. The mountains were prolific in apples, cherries (both white and black), strawberries, blackberries and mulberries. In that there was no method to freeze produce during the early years of George’s life, much of the food was canned during the summer to be used throughout the year. Apples and potatoes were stored in a cellar and the milk produced by the cows, both morning and night, was put in large steel cans in a spring house for consumption and sale.

Winters in the mountains were generally very cold with lots of snow. George and his brothers, Pat, Mack and Bill, were very active in sports. During the summer, they spent many hours after work swimming at the Watauga River or on the clay tennis court at Cove Creek. Swimming holes, tennis courts, school and church were the primary social venues for the Mast boys.

George was an all-tournament basketball player in the three counties of Avery, Ashe and Watauga his junior and senior years at Cove Creek High School, with his team winning all of the regular season games. After graduation from Cove Creek High School, George attended Wake Forest College when it was located in Wake Forest for two years, and then in Winston-Salem when it moved to Winston-Salem in 1956. After graduating from high school and entering Wake Forest College at Wake Forest, North Carolina, it was decided to combine college with law school. After three years, George entered Wake Forest Law School on what was known as the three and three career program—three years of undergraduate and three years of law school.

In the late 1950s, while at law school, George was guided by several exciting and motivating professors, Dean Carroll W. Weathers, Robert E. Lee, James Sizemore, James A. Webster, and Norman Adrian Wiggins. Following graduation from law school, George entered the U.S. Army as an attorney in the Judge Advocate General’s Corps. After attending the Judge Advocate General’s School in Charlottesville, Virginia, at the University of Virginia, George served at Fort Bragg and Fort Leonard Wood, Missouri, where he did extensive trial work in general courts-martial. In October in 1962, he completed his tour of duty with the U.S. Army as a Captain.

Having had extensive trial experience while in the military service, George entered the practice of law with Robert A. Spence in 1962 in Smithfield. During the 1960s while practicing in a small town, one did all types of work, and for several years George represented clients in criminal matters, estate planning, real estate transactions, and all types of litigation. Therefore, throughout George’s legal career, he has been engaged in almost all types of legal issues.

George enjoys both the beach and mountains, visiting both of those regularly on weekends or holidays. George is married to Gayle Fitz, formerly of Chadbourn, North Carolina, and has two children who are lawyers—Charles who practices with the Mast Firm, and Christa who is an Assistant District Attorney in New Hanover County. Much of George’s free time is spent with his five children and nine grandchildren in Smithfield, Wrightsville Beach, or the mountains.

George continues to be very actively involved in all types of legal representation, including estate planning, real estate transactions, and all types of civil litigation.